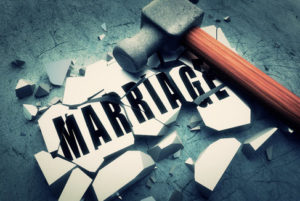 When someone contemplates ending a marriage, the option most people naturally choose is divorce. Divorce is a well-known and relatively easy method of dissolving a marriage, but it is not the sole legal procedure able to break a union. Annulment, while a more complicated process, may be a better choice for some parties. In order to decide which procedure is best for a particular person, one fundamental difference between divorce and annulment must be understood. Divorce is a procedure to dissolve a legal marriage that attempts to return the parties to the position of unmarried individuals by dividing the financial holdings and parental obligations of each party. An annulment, on the other hand, essentially declares there was never a legal marriage in the first place, and consequently, courts are reluctant to delve into untangling parties’ lives unless unavoidable, such as parenting decisions. Courts will only grant an annulment under limited circumstances that are overwhelmingly dictated by past court decisions. This fact results in judges holding more discretion over the outcome of the case, and is the main reason these cases are so complex. However, a person may have good reason to want a court to say a marriage never happened. A discussion of when a court must grant an annulment, and when it has discretion to grant one, will follow below.

Courts grant annulments in two situations – when the marriage was invalid or void from the start, or when a marriage was voidable. A voidable marriage is not necessarily invalid from the start, but may become so. Courts must always grant annulments for void marriages, but can decide whether to annul voidable marriages. Void marriages involve some type of illegality, and generally include one of the following circumstances: bigamy, incest, underage spouse, or mental incapacity. One recent example of a marriage that would qualify as void occurred when a Florida man learned he unknowingly married his granddaughter. The discovery was made when the bride recognized her husband’s son as her father in family photographs. While the couple has no current plans to end the marriage, this situation would easily meet the criteria of a void marriage since the couple is committing incest. Since void marriages consist of some violation of law or legal requirement, the invalidity is easier to demonstrate, but these cases are rare.

As noted above, voidable marriages may be valid at the start but a later discovery renders them invalid. The main difference between void and voidable marriages is that voidable marriages retain the possibility of validity, but void marriages can never be legitimate. Determining whether a voidable marriage is invalid, and thus entitled to annulment, is based on decisions by other judges in the past. This means proving invalidity is very fact-specific and harder to establish overall. The following are circumstances where courts are more likely to find a marriage invalid:

If you want to end your marriage for any reason, talking to an experienced divorce attorney is the first step in making this major life transition. Both divorce and annulment present many legal consequences anyone seeking to leave a marriage should know, and this is where the services of a divorce attorney become invaluable. The Tampa law firm of Bubley & Bubley, P.A. understands the stakes all divorcing parties have in the outcome of a legal case, and will work to obtain the best results for you and your family. Contact us to schedule a free consultation.