Strategies For Coping With The Vindictive, Spiteful Or Menacing Co-Parent 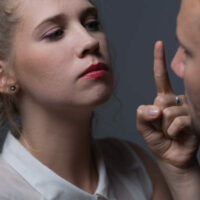 Angela and Robert had a picture perfect marriage. They met in high school, got married right after graduation, bought a home and started a family. Everything changed once the kids arrived. The fighting and violence only seemed to escalate as the years went by. Robert was convinced Angela was suffering from depression, as she would continue to threaten violence or self-harm if he were to leave her or take the kids with him. Finally after one particular incident, Robert filed for divorce and sole custody of both children, citing Angela’s instability and violence. The court ruled in his favor and granted Angela supervised visitation weekly, to be re-evaluated in one year.

Since the court’s ruling, Angela has only increased the threats towards Robert and the kids. Now Robert is convinced Angela has been lurking the property and child services has twice arrived at Robert’s home to investigate a claim that the children were living in squalor. The investigations are unfounded, but Robert is sure that Angela is making the calls out of spite. Even though the divorce is finalized, Robert is scared of what Angela might do next. What are his options?

Document Evidence of Abuse and Escalation

Many people assume that once divorce is final, the other party will move on and stop with the antics and attention-seeking. Unfortunately for some, the fact that the other party went through with the divorce can destroy an abuser’s ego and incense them to lash out, even towards shared children. If the victim of an abusive relationship is no longer available to the abuser for the purposes of manipulation or intimidation, the abuser might feel exposed themselves and increase the threat of violence or harm, even indirectly. Some abusers will stop at nothing to feel in power again, even if it means filing a false police or child services report or alienating the kids. If you are currently experiencing abuse or threats at the hands of an ex-spouse or co-parent, you need to document everything. Even if the other parent is simply casually talking about taking the kids out of state or telling you that you are a bad parent, write it down. Every time the other party misses a pick-up or drop-off or says something off color, document it.

If your ex has acted out before or is steadily making threats towards you, you need to make a safety plan for yourself and your children. This includes advising your children of safe alternative exits in your home, telling your child’s school what is going on and not to release them to an unrecognized individual, and instructing your child how to call 911 in an emergency. Prepare an overnight bag with copies of important documents, medicines, clothes and toiletries for your family if you need to leave in a hurry. Tell a friend what is going on, secure your doors and windows, and seek legal action.

Our attorneys at Bubley & Bubley can help you file an emergency protective order or temporary protective order and appear on your behalf at both hearings. The judge presiding at a domestic violence hearing can award you temporary custody of family pets, bar the co-parent from your home and work and from your child’s school. The judge can also order your ex to surrender firearms, attend counseling and pay emergency support maintenance to you directly. You can also file for a custody modification with the presiding family court citing the protective order and violence from your ex.

Spousal abuse is serious. Unfortunately, divorce does not always bring an end to an abuser’s tactics. Often the abuser will actually escalate against their ex and shared children to the point of violence. It is crucial you seek the help of an experienced family law attorney if you believe you and your family are in danger. Even if you think your ex might be bluffing, you cannot be too careful. Our Tampa family attorneys at Bubley & Bubley, P.A. are standing by to help.