How Is Child Custody Determined In Florida? 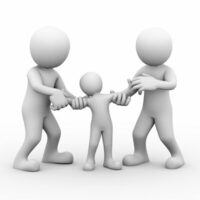 For many people, the most stressful part of a divorce is the possibility of losing custody of their children. It’s incredibly difficult to turn over decisions about your children and that will affect your and their lives to a judge who has never met you and doesn’t know your family. It can help to understand how the decision is made, what factors are considered, and that there may be other options available for determining custody that you are not yet aware of.

A Judge Doesn’t Have to Determine Custody

The first thing to surprise most people is learning that they don’t necessarily have to let a judge decide who gets custody of their children. A judge only has to make determinations about custody in the event that you and your co-parent are unable to come to an agreement on your own. Additionally, you do not have to decide entirely on your own. It is possible to have help from attorneys or a third-party mediator who is trained in conflict resolution. If you are able to reach an agreement on custody and all other matters that are required to be settled for the parenting plan, an attorney can draft your parenting plan and custody agreement and submit it to the court for approval. Provided the judge finds the agreement to be in the best interest of the child, they will order it into law just as they would if it had been decided in court.

Best Interest of the Child Standard in Florida

If you and your co-parent are unable to reach a decision independently about custody, then the matter will go to court to be decided by a judge. The judge will reach a decision on custody using the best interest of the child standard. This standard uses a number of factors in order to determine what custody arrangement would be in the child’s best interest. In reaching this decision, the judge does not have to weigh all factors equally and does not have to even consider all of the factors. The judge can consider factors such as which parent is best equipped to meet the child’s needs, if living with one parent would allow the child to remain in the same school and immersed in a supportive community, which parent has the financial and emotional means to best support and care for the child, whether there is a history of domestic violence or substance abuse, and which parent would provide the most stability for the child. If the child is old enough to have an intelligent opinion on which parent they would prefer to have receive physical custody, the judge can also choose to consider their opinion, however, the judge is not required to.

If you are dealing with a child custody matter, it’s important to have a dedicated Tampa family lawyer on your side. Contact Bubley & Bubley to schedule a consultation today.