Are Grandparents Entitled To Visitation In Florida? 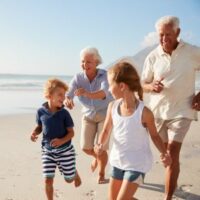 A grandparent is so excited to learn of the arrival of a new grandchild to potentially spoil and care for. However, she is less than enthused when her daughter-in-law starts limiting her requests to care for the child in her home, watch the child every Saturday and take the child for outings without mom and dad. Even after multiple arguments, the parents refuse to allow the grandparent unsupervised visitation with their child. Perturbed, the grandparent attempts to file a petition for visitation with the Florida courts. How likely is it that she will be awarded visitation?

Some grandparents who do not see their grandchild as often as they would like might seek a resolution in court. Florida law does not automatically grant custody or visitation rights to grandparents, however. For a grandparent to be awarded custody of a grandchild, they have the burden of proof in establishing that the child’s legal parents are both unfit, and that their obtaining custody would be in the best interest of the child. This is a tall order to meet. Even if one parent passes away, the grandparent would need to prove the other parent is unfit to raise his own children, which again, is an extremely different burden. Grandparents are understandably frustrated when they cannot visit grandchildren but attacking a parent’s fundamental right to raise her children is not the avenue of expression to pursue in almost all cases.

In the limited cases where grandparents were ordered custody, the court had already found both parents unfit and the child was removed from them, then the grandparent petitioned the court for custody. If a child is orphaned or in foster care, courts may show some deference to family members petitioning for custody, but there is no guarantee. Ultimately, if a grandparent seeks visitation, they must show that there was a pre-existing relationship between themselves and the grandchild that has formed a solid bond. Usually if a grandparent has come to court requesting visitation, it means they already have a difficult relationship with the adult child or daughter/son-in-law, had a falling out or have given the parents a cause for concern over the well-being of their child.

Legal parents are entitled to raise their children how they see fit. Courts will only remove a child from the custody of the parents if there is evidence of abuse or abandonment, or if the parent is incarcerated. In addition, courts will only award visitation to grandparents or extended relatives if visitation does not cause material harm to the relationship between the birth parent and minor child, and grandparent visitation would be in the best interest of the child. In some cases, the grandparent or third party has served as the child’s surrogate parent due to unforeseen circumstances. In those limited situations, the court may act with leniency in granting some visitation time, but again, it is not the court’s position to undermine the parent’s authority in choosing extended relationship interactions with children. Unfortunately, sometimes the grandparent actually undermines the parent’s authority (deliberately or unintentionally) by contradicting their parenting efforts or disparaging a son or daughter-in law in front of the grandchild.

If your nuclear family is having difficulty setting boundaries with in-laws and grandparents, or if extended family has put your child in danger, you can set hard limits. Our attorneys can help you identify an amicable solution. You are under no obligation to meet expectations of extended family, nor are they guaranteed visitation rights under Florida law. Your job is to protect and provide for your nuclear family. If you need assistance with a familial issue of any kind, contact our seasoned Tampa family attorneys at Bubley & Bubley today.